Considering the safety of the students and the increasing demand from some students & parents for postponement of NEET UG due to increasing COVID-19 cases in the country, the Union HRD Ministry in consultation with the National Testing Agency (NTA) recently announced NEET-UG 2020 Postponement for the second time. The NEET UG 2020 exam shall now be conducted on 13th September 2020.

The NTA has released an official notification NEET-UG 2020 Postponement as well as given another opportunity for the students to make corrections, if any, in their NEET application form and change of exam centre cities on or before 15 July 2020.

Now since the exams have been postponed let’s figure out the consequences it has on the participating students also how to salvage this situation. While addressing the postponement we need to look at the immediate impact as well as future repercussions.

While the announcement of NEET UG 2020 postponement may have been rejoiced by some but mostly the larger section of students wanted this ordeal to get over sooner. NEET-UG 2020 Postponement has provided an additional breather to those who had rescued themselves from the preparations due to growing uncertainties arising with COVID however a larger section of the students who had put in through effort for the exam, the postponement has come as a disappointment. It is difficult to regain the same psychological confidence next time around as the uncertainties about conducting the exam would still loom large with ever rising number of COVID cases in the country.

Let us understand one thing, NEET UG is going to be conducted at any cost and shall not be cancelled permanently under any circumstances, it is hardly matter of some more time. Losing one’s focus at this time can be detrimental to the final outcome for which you have been planning for the last two years; I mean you take up Medicine in 11th & 12th with an aim to set yourselves up for a merit in NEET. So despair not instead use this time wisely in a way that will benefit in your overall performance. 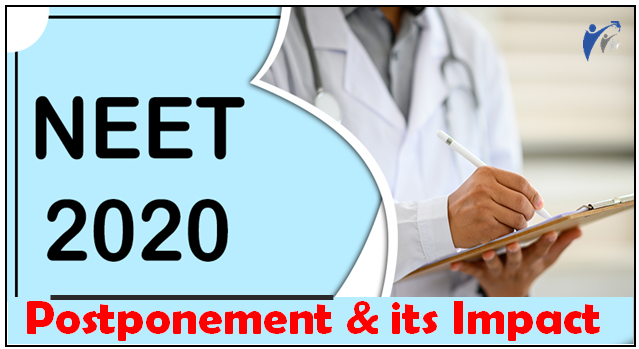 With two months of time at hand now is the time to strategically plan for the preparations. Remember this is the last chances to plan your studies in order to achieve your goal. You should set a goal with an aim to increase your marks tally by a minimum 50 – 60 marks. Divide your preparation in two phases during these two months.
In the first phase, (i.e. the first month) major focus should be given to improvise on the grey areas, your major time should be utilized in strengthening those subjects where the preparation lacked previously. With most of the students scoring well in Biology subject in their mock tests/practice tests often lose out on some marks because of lack of preparation in Physics and Chemistry. Hence, this extra time should be utilized to identify those areas which needs improvement and put more efforts to work on those concepts to score a few extra marks and get admission in one of the top medical colleges in India. . It would be easy to identify the weaker areas by scanning through previous scoring patterns of your coaching tests. Once the weaker section are identified immediately start revising it or if required take an experts advise or even a private tutor if that helps. Even an improvement by a couple of marks would go a large way in improving the overall ranking in the NEET merit list.
NEET UG rank is largely affected by every single NEET mark scored. Based on the previous year’s analysis, for the NEET score of 500, the NEET rank allotted was around 49,000 and for the NEET score of 550, the NEET rank was around 23500. The additional 50 marks has brought a huge difference of 25,500 in the NEET ranking.
So this shows how each mark can change the overall NEET rank and possibly the prospect of a better allotment. Also with more time available for preparation now, there are high chances that the competition may get stiffer with and even the average scoring students adding extra marks to their tally. This means even the marks to rank status would also be higher compared to last year.

If you have been targeting Private medical colleges in India previously now is your chance to aim for a merit seat in a Government medical colleges in India by positively utilizing this additional time and score better marks. Remember that any reduction in NEET score would affect NEET UG rank and thus you may lose out on the chances of securing MBBS admission in targeted colleges and may need to suffice with less preferred or high fees colleges. Hence, this first month is quite crucial to your plans for next two months preparation and the focus should be mainly towards improving low scoring areas.
The second month should be completely dedicated to revision and practices through Mock tests. The importance of revision is twofold. Firstly, it helps students to remember facts, concepts, figures and methodologies that one has covered some time ago. Secondly, it will help increase one’s confidence and reduce anxiety which in turn help them to be well prepared for NEET UG exam.
A realistic revision plan should be made which should include all the subjects and areas covered in the NEET UG exam. During this revision period, one should pay extra focus on revising subjects that makes him/her anxious as it will help reduce anxiety. One need not tackle the difficult areas first. Getting started with well-prepared subjects will boost confidence. However, one should not put off the difficult areas until the last minute. If the revision plan is followed diligently, one can surely achieve positive results.

Even though this question is a bit irrelevant at this point in time but needs to be discussed in the longer perspective of the prevailing situation. Now with the selection exams itself being delayed we are sure that it shall have an impact on the MBBS academic calendar also. In case of any further NEET-UG 2020 Postponement the impact shall be harder and very less breathing time would be available in the first session of your professional course.
With the NEET earlier re-scheduled in July, it was expected that the MBBS admission process may be completed by October and the new academic session would begin in September. Another delay has only delayed the onset of the new session, virtually erasing almost a semester. The authorities will have to squeeze in 18 months syllabus to a year putting extra pressure on the students to complete all the topics within that time.
In the current scenario, students should not worry about the delay in the start of the academic year rather focus on giving their best in the exam. Let’s leave it to the college authorities to work out a solution to complete the syllabus schedule in a comprehensive way without creating additional stress.

We understand that these are testing times and it is a fact that every NEET aspirant is going through a tough phase and the current situation is only adding to their stress. But don’t allow these circumstances to overcome your future plans and definitely not to be a reason for any lack of performance in the exam. Let’s stay positive and take this NEET-UG 2020 Postponement as a boon rather a bane and make effective use of this bonus time to excel in NEET UG leaving aside all rumours and worries about postponement or future repercussions. Just keep one thing in mind you ought to study medicine and no one shall stop you from achieving your purpose.