The National Entrance-cum-Eligibility (NEET) test will be conducted twice a year as the Union Ministry of Health and Family Welfare gave its approval for it, confirms reliable sources. NEET exam will now be conducted twice as the Joint Entrance Examination (Main) is conducted from the last year. The schedule for NEET UG Test which is conducted for medical admissions to several medical colleges in India is yet to be finalized by the exam conducting body. 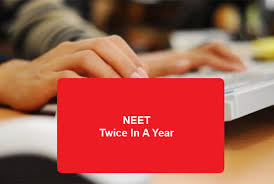 The best of two scores will be taken into consideration if the student is appearing twice for the exam as it is happening in JEE Main since the last year. The thought behind this approval is to reduce the stress of students and allow them to perform better in the exams.

NEET exam is generally conducted in the month of May every year. Last year it was conducted in September in view of the COVID-19 pandemic. There were speculations going on for around some time now to conduct NEET twice a year. Many students appeared before the court and the Ministry of Education to request for conducting NEET twice a year and in online mode. With the approval for conducting the exam more than once, lakh of students are now relieved from half of the stress. However, conducting exam online still remains a question and the schedule of the exam is yet to be released, say reports.